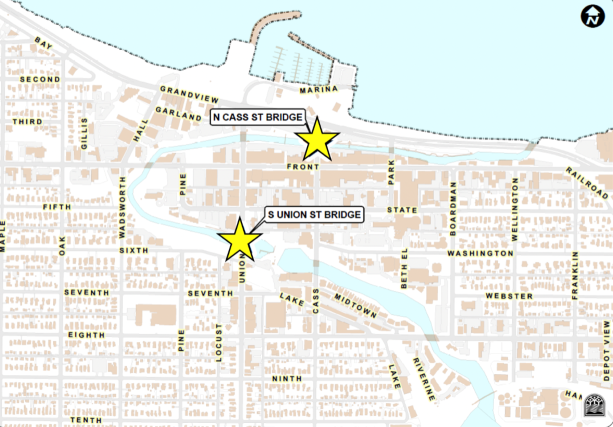 Traverse City Downtown Development Authority (DDA) board members Friday approved contributing funds toward two final bridge projects downtown – the reconstruction of the North Cass Street and South Union Street bridges, both planned for 2023. The DDA board also approved a project agreement for engineering services to move forward on the expansion of the TART Trail in downtown Traverse City. Both projects now head to city commissioners tonight (Monday) for final approval.

Traverse City is nearing the finish line of a multi-year project to rehabilitate or replace multiple aging bridges in the downtown area. The city has already completed work on the Park Street, South Cass Street, East Eighth Street, and West Front Street bridges since 2021. The last two major bridge projects are the rehabilitation of the South Union Street and North Cass Street projects, set to take place next year.

Improvements on both bridges will include replacing the deck and beams, widening sidewalks, installing state crash-tested-and-approved bridge railing, and adding pedestrian railing approaching the bridge. The South Union Street bridge will receive a historic balustrade treatment on the outer edge and down lighting to illuminate the walkway, while the North Cass Street bridge will have improved head clearance under the bridge. The city is aiming to complete the bridges before reconstruction work starts on Grandview Parkway, a project planned for 2024.

While initial cost estimates put the South Union Street bridge at $1.7 million and the North Cass Street bridge at $800,000, the cost for North Cass has since risen to $1.185 million, according to city documents. The Michigan Department of Transportation (MDOT) is covering 90 percent of the project costs through the Local Bridge Program, contributing $2.6 million toward the project. The city is responsible for a 10 percent match – or $291,450 – plus engineering and inspections, estimated at $221,400. The city’s total is therefore just over a half million dollars.

City funds for these two particular bridge projects will come from the DDA through its tax increment financing (TIF) districts. At Friday’s DDA meeting, board members approved increasing downtown’s contribution to cover the added costs, including $381,500 from TIF 97 and $135,000 from the Old Town TIF. “These are the last two bridges that we’re going to have to complete,” said Mayor Richard Lewis, who sits on the DDA board. “I think this is a fair exchange that we can finish these and the projects are done.” Lewis noted the initial cost estimates were several years old, saying it wasn’t surprising they had increased. City commissioners will vote tonight to authorize a contract with MDOT for the project to proceed; MDOT is accepting construction bids through December 2 and will soon choose a contractor to oversee the projects next year.

Also in the downtown area, the city is preparing to hire a firm to oversee engineering and design services to expand and improve the TART Trail between West End Beach and the intersection of Garfield Avenue/Peninsula Drive. Project partners including the city, DDA, and TART Trails are looking to make trail improvements in conjunction with the 2024 Grandview Parkway project to avoid duplicating traffic disruptions and tearing up the same area twice.

A conceptual design – created with input from community members and businesses along the corridor – shows the trail more than doubling in width in areas to 16 feet, with 10 feet dedicated to bidirectional bicycle use and six feet dedicated to pedestrian use. The trail alignment could shift in some areas and would also expand down past Delamar, Sunset Park, the Traverse City Senior Center, and NMC’s Great Lakes Campus. A future trail connection could lead down Peninsula Drive, opening up the opportunity for additional connections to NMC, Traverse City Central High School, Eastern Elementary, and the Civic Center.

The city, DDA, and TART Trails have each committed $150,000 toward engineering costs for the trail expansion, for a total project budget of $450,000. DDA board members Friday approved moving ahead with the agreement, while city commissioners will vote tonight to actually award the engineering contract. Two firms responded to a request-for-proposals (RFP) for the contract; Environmental Consulting & Technology and Progressive AE, with the latter having a lower bid of $448,391. Progressive AE is the firm that completed the initial trail expansion conceptual design and has also worked with the city on the Grandview Parkway reconstruction project.

Progressive AE also offered to oversee construction services for the TART Trail expansion for an additional $325,031, but staff recommended holding off on awarding that contract and just proceeding tonight with awarding the firm the engineering and design contract. The intent is to award the construction management contract in the future “assuming construction occurs in 2024,” according to City Planning Director Shawn Winter. Project partners will still need to separately fundraise to pay for the trail reconstruction itself. While an official cost estimate will come after engineering, the expansion is likely to cost in the millions of dollars.

Also at Friday’s DDA meeting…
> Board members officially recognized DDA and city staff for the recent implementation of the pilot project to cover State Street, Pine Street, and Boardman Avenue to two-way traffic, what DDA CEO Jean Derenzy called a “generational” project that took two years of planning to implement. The DDA also approved a three-year contract with Progessive AE for $75,000 – included in the pilot project budget – for data collection services to assess the economic and traffic impacts of the conversion. Derenzy said the DDA is accepting comments on how the pilot is working from the public at two-way@downtowntc.com and can modify the corridors as needed during the experiment. City Commissioner Mitch Treadwell said during public comment that the DDA should consider adding more signage to address “driver confusion” at key intersections. The DDA has also addressed confusion on social media, notably for the intersection of State and Cass: The left eastbound lane of State is now a left-only turn onto Cass Street, while the right lane is for through and right-turn traffic only.

> DDA CEO Jean Derenzy presented a required biannual report to the public giving an overview of DDA funding and projects. She noted that properties in the TIF 97 district now have a total combined taxable value of over $155 million, while properties in the Old Town district have a total combined taxable value of over $68 million – numbers that have increased steadily over the last five years thanks to development growth. Projects that utilized TIF funding in 2022 included the East Front Street repaving, planning for the city’s new mobility plan, planning for a riverfront redesign (see below), and the Moving Downtown Forward project. The last item is designed to identify an organizational and funding structure for the DDA moving forward; Derezny said a final report with recommendations will be presented to DDA board members and city commissioners in December. In 2023, TIF funds will continue to be used for some of those projects in adding to creating a conceptual design for the new civic square, planning for the West Front Street parking deck, and the possible redevelopment of parking Lot G next to Modes.

> Finally, DDA board members unanimously approved a new conceptual design for the Boardman River riverfront and a pedestrian plaza in the 100 and 200 alley blocks of Front Street. The motion directed staff to begin working on a plan for implementing improvements in a phased approach and encouraging the city and other partners to also incorporate the new design into their planning. Lewis noted the redesign is a “long term” plan that could take decades to fully implement, though some improvements could come as soon as the next few years. As a conceptual plan, some elements may be modified or removed as work progresses since the vision is “subject to its collision with reality,” noted board member Pete Kirkwood. Still, board members expressed excitement about the potential for improved placemaking, river health, and economic development under the new design. “We’ve laid the groundwork,” said Chair Gabe Schneider. “We’ve set this plan in motion.”