When looking for the Best Small Town for 2016, all signs point north to Traverse City. The town of 14,600 consistently ranks on the annual Livability list of the 10 Best Small Towns (this is its fourth year in a row), and it’s easy to see why. With its freshwater beaches, sprawling vineyards and breathtaking views of Lake Michigan, visitors and newcomers have more than enough excuses to quickly fall in love with this Midwestern town.

Traverse City offers residents plenty of places to play and enjoy a healthy, active lifestyle. “There are hundreds of square miles of state and national forests, dozens of nature preserves and wildlife refuges for hiking, cycling and beachcombing,” says Michael Norton, Media Relations Director for the Traverse City Convention & Visitors Bureau. “Some of the nation’s finest trout streams are located here, and our lakes and rivers are perfect for sailing, boating, swimming and canoeing.”

Why Traverse City is the Best Small Town in America

While a large part of the town’s economy is based on tourism, Traverse City is still agricultural at its heart. The Traverse City area is the country’s largest producer of tart cherries, harvesting 360,000,000 pounds of them annually. Each July, the town celebrates the cherry harvest with the weeklong National Cherry Festival, complete with fireworks, a parade, live music and pie-eating contests. The town’s location near the 45th parallel also makes it ideal for growing grapes, and there are more than 50 wineries in the Old Mission Peninsula wine region, of which Traverse City is a part. Traverse City also boasts a thriving craft brewing scene, with 18 microbreweries, not to mention the brew pubs and craft brew taprooms. As a result, Livability named Traverse City one of the 99 Best Beer Cities in 2015.

“Traverse City is a great place to indulge the appetite, too. Our restaurants feature a growing cadre of talented and original chefs and some of the best locally-produced wines and craft brews being made in this part of the world. Top chef Mario Batali is a big fan of our food scene – he even bought a house nearby,” Norton says.

The town’s diverse range of restaurants, which helped land Traverse City on Livability’s list of the 10 Best Foodie Cities in 2014, are also a great place to people watch, especially for the celebrities that flock to the beach town in the summers. Traverse City’s burgeoning culinary scene ranges from traditional American fare to farm-to-table favorites and ethnic eateries.

Another of the Traverse City’s draws is the diversity in housing and neighborhood options.

Whether you choose to buy a condo in the Downtown District along the bay with its mix of cultural, shopping  and dining options, or a Victorian in the historic Grand Traverse Commons, you’re sure to find friendly neighbors, good schools and access to parks and other quality-of-life conveniences. Traverse City Area Public Schools is the largest school district in northwestern Michigan, and is consistently ranked as one of the top districts in the state. The school system also boasts an award-winning music and performance arts program, provides students with an international education, introducing them to world languages such as Mandarin Chinese and gives families options such as preschool and Montessori programs and Early College and Dual Enrollment to allow high schoolers to earn college credit. 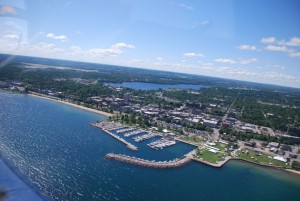