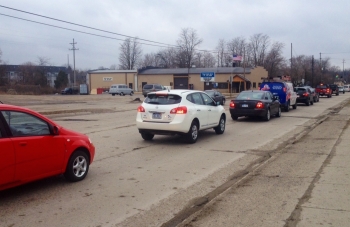 Traverse City commissioners Monday committed to reconstructing Eighth Street in 2019 – a verbal promise that sets a firm timeline goal for the city and was cited by several commissioners as justification for not temporarily repaving the corridor this year.

Commissioners made the commitment while voting to approve funding for several other upcoming paving projects, including $300,000 to reconstruct the north alley of Eighth Street between Boardman and Railroad avenues. According to city staff, that project is a key precursor to the reconstruction of the entire corridor, as it will help maintain access to businesses and residences while Eighth Street is closed for reconstruction.

During discussion of the alley project and a separate proposed $167,640 contract with Elmer’s Crane and Dozer to lay down a temporary skim coat on Eighth Street this year as a Band-Aid fix for the road’s deteriorating pavement, several commissioners expressed their desire to set a firm timeline for the entire reconstruction of the corridor.

“Our credibility is starting to get shot, because we have put it off and put it off,” said Commissioner Richard Lewis, saying he wanted the city to implement the “complete plan” for the corridor created through a 2016 public charrette process. After other commissioners echoed Lewis’ remarks, City Manager Marty Colburn said the estimated $7 million Eighth Street project could start next year if city commissioners were willing to commit to funding it.

“We do have the ability to get Eighth Street done…assuming that the city commission gives me the resources to do so,” Colburn said.

Colburn said city staff had been waiting to hear from the state of Michigan on whether $1 million in funding would be available to help with the Eighth Street project. But he said it now appears “that is not going to occur,” leaving the city on its own to fund the project. That could require tough decisions by city commissioners on how to pay for the reconstruction, such as delaying other projects, making cuts, or bonding the project.

“We can fund this, (but) it may be painful, we may not like it,” said Commissioner Brian McGillivary. “But we have repeatedly told people we’re going to do this…that road needs to be fixed, and we just need to accelerate it and get it done.”

Colburn told commissioners he would bring funding options to them for the project by this summer. Commissioners then voted 6-1 to reject the temporary overlay project for Eighth Street this year, with several saying their ‘no’ vote was directly tied to their commitment to start Eighth Street’s reconstruction by next fall. Both McGillivary and Commissioner Tim Werner reversed course on their previous support of investing in a skim coat for the corridor – support initially expressed when the reconstruction timeline appeared to be several years out. McGillivary compared the spending of $167,640 to temporarily smoothen a road that will be torn up next year to pouring money into repairing a house roof that’s “structurally unsound and would have to be replaced.”

Lewis agreed. “I’m not a fan of putting a top coat on if I’m given assurance and the public is given assurance and we have the nerve (to commit to the reconstruction),” he said. “We are doing it next year. That’s the only way we’ve got to think here, or else do this (temporary repaving project).” Commissioner Amy Shamroe reiterated the commission’s commitment to the reconstruction. “This board has decided we are doing it next year…I am confident that we will get this accomplished,” she said.

Commissioner Michele Howard was the sole ‘yes’ vote in favor of funding the temporary repaving project. She said the current condition of Eighth Street is “not good for anybody” and rebutted McGillivary’s roof analogy by saying if her roof was leaking water into her home, she would immediately repair it. Howard was also one of the two dissenting votes – along with McGillivary – to reconstructing the north Eighth Street alley, citing concerns it would “drive more traffic down that alley” where Boardman Neighborhood residents live.

Commissioner Brian Haas, however, noted the alley is not just a residential but also a commercial alley, and said the project is “one of those check boxes we’ve got to get through to reach that ultimate objective (of reconstruction). I think if we continue to put this off, it’s one more thing to add to the list next year.” City Engineer Tim Lodge also stressed that the alley repaving was an “essential element” of the Eighth Street reconstruction project. He noted that when reconstruction begins, Eighth Street will be completely barricaded off, with no traffic lanes maintained through the corridor.

“I will tell you that one of the biggest things that we can do is to assure businesses along the corridor and other property owners access to their properties during construction,” Lodge said. “This street will be entirely shut down…this project on Eighth Street is going to be tremendously impactful.”

Chuck Cady, a resident of Midtown neighborhood along Eighth Street, said he and other property owners had been waiting at least a decade for repairs to be made to the corridor and encouraged commissioners in their prioritization of the project. He said that “people who are along Eighth Street have been anxious to see their property values enhanced,” adding those values have been declining for years.

“We feel strongly that (the reconstruction) will add to the quality of life for blocks around in all directions…it’s owed to the community, it’s owed to the taxpayers,” he said.